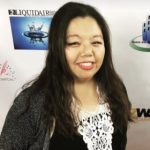 Founder of the Made of Stars

Susan Hu was born in Taiwan a beautiful island in East Asia. She spends the first 7 years of her life in Taiwan, her family decided to move to the United States. She spends most of her childhood through her teenage life in Hershey, Pennsylvania.
After High school, she went on and attend community college in Harrisburg, Pennsylvania. While she was attending community college. Susan was accepted into Walt Disney World College Program Internship, where she has worked in Orlando, Florida for 2 years and came back to Harrisburg Area Community College to finish her Associate Degree in Music and Recording major.

After a few years later, Susan decided she wants to gain more knowledge and work in the entertainment industry area. She went back to school and received a Bachelor Degree in Entertainment Business from Full Sail University. She was a professional red carpet host and journalist for 3 years with WTVNetworks in Los Angeles, California. Where she highlighted success stories with celebrity interviews and attending different red carpet events such as movie premieres fashion shows, New York Comic Con for many years.

She has covered the Mercedes Benz Fashion Week NYC 2011 NY Film Festival 2010, 2011, Black Eyed Peas MTV Special Event 2011 and SAG Awards in LA 2011. Susan then decided to make a move to New York City to pursue her passion for the entertainment industries. Susan is also an aspiring actress who recently worked on the feature films starting with:Bourne Legacy, Fists of love, 36 Saints (Feature Film) played over 200 AMC theaters nationwide including AMC 42ndst in NYC. The movie is available now on Netflix.

She has recently done administrative work for the " Chix 6" (Off Broadway Musical) in NYC. Susan is also a producer on an ongoing documentary project called The Solar Champion.

Susan is still chasing her dreams now, she is the Communications / Social Media Director for the International Film Festival in Manhattan, NYC and The National Academy of Television Arts and Sciences Emmys (with the responsibility of marketing the through Twitter, Facebook and all the social media outlets including word of mouth promotion.

She has been in a Netflix hit show called Magic for Humans ( S1,E1).
Susan also was on youtube shows called Listed interview where she interviews artists alone with some of cast-mates
https://www.youtube.com/channel/UCZszoqohRSq09O8Gpw3W3CQ

Not only that, she has her own youtube channel called Made of Stars, where her best friend and her starting to explore the unknown spiritual life journey and sharing their throughs and idea, opinions with the public. ( Link --> https://www.youtube.com/channel/UCsOjl-rInbJADZZiS-qVSew)

From Other IMDB movie credit list, please visit the below
http://www.imdb.com/name/nm6504897/?ref_=nmbio_ql