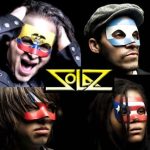 Solaz's sonic boom electrifies music fans internationally with a mix of different genres woven into a sound that is unique, yet melodic appealing to the masses around the world.

Solaz has hypnotized music fans worldwide on their national & international tours, is now crossing over 500,000 views on their new music video "Endless Summer" within the first 6 months of release with no signs of slowing down clearly on the way to the 1 million views before 1st quarter 2021. Every month Solaz enjoys tens of thousands of monthly listeners on Spotify with over 36 countries listening around the world.

As part of their media tours, Solaz have made countless appearances for their fans on major network TV hit shows around the globe like NBC Telemundo's "Caso Cerrado" "Titulares y Mas" among others, and have been featured in major international magazines & newspapers, and have been invited to radio station interviews around the world. In a noteworthy article published by the world renowned Guitar Player Magazine, Solaz was said to have a "guitar wizard's chops and a songwriter's sense of balance" highlighting what music fans around the world clamor so vehemently to after going to a Solaz concert.

Solaz recently released their new music video single "Embrujo" worldwide and has surpassed 60K views in a no time! 2022 will see the return of Solaz to the concert stage ready to assault their fans sonically in celebration of life after the ending of the current pandemic!