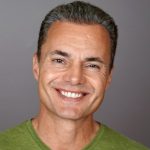 Matt Borlenghi is an American actor, best known for his roles as Brian Bodine on All My Children from 1991 to 1993 and 1996, as Russ on The Jeff Foxworthy Show, as Rich Casey on Police Academy: The Series and now as Lyle the #pawnshopguy on Cobra Kai