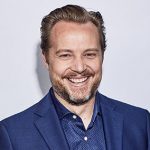 Director, and producer Emmy® nominated James Ganiere is a Producers Guild of America and TV Academy member, and Alumni of USC School of Cinema, a TEDX speaker, geek and family man.
Founder and president of Rio Vista Universal, who’s brand focuses on characters, their relationships, transformations, pursuit of becoming whole, happiness and a better tomorrow, no matter what the genre, medium or project. Creative team James and Rebekah (spouse) just signed a deal memo to direct and produce multiple films in a new paranormal franchise. James truly does “Carpe Diem” with projects that range from GEAR HEADS on Discovery and his directorial narrative feature debut REKINDLING CHRISTMAS, to directing and producing LAND OF THE FREE: IN THE SHADOWS a documentary across 4 continents, to live events like FARSCAPE: 20th Anniversary San Diego Comic Con partnering with The Jim Henson Company, to VR for Warner Brothers and Disney.  He gravitates to highly commercial projects and those with heart having to do with animals, children or family and works with kids in after school programs when not creating worlds.