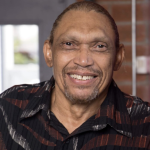 Hawthorne James is an American actor and director, best known for his role as Big Red Davis in the 1991 film The Five Heartbeats. He is also known for his role as Sam, the injured bus driver, in Speed (1994 film). James was born James Hawthorne in Chicago, Illinois, the son of A.M. Alene and Robert Hawthorne. Hawthorne has acted on Fresh Prince Of Belair, SPEED, Charmed, Stargate, Seven with Bradpit and Moris Chestnut. Hawthorne has over 30 movie and tv credits. Most recent project he starred in was Flint Tale which raised awareness to the Flint Michigan water crisis