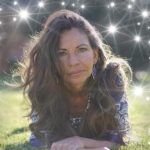 Jeannie Saunders (aka Jeannie Starr) is a professional Mentor, Songwriter/Musician Author, and Guided Imagery Facilitator. Since the time she was a child Jeannie has been highly creative, having written and performed hundreds of plays, skits and songs in her community. She started out using her back porch at her home as the venue to invite family members, neighbors and friends to come join the fun. Today Jeannie has professionally written and recorded three songs, “Just Believe,” “Fly,” and “This is Your Dream Song” with hit singer and songwriter Anthony DeMattia (aka Fiz Anthony, writer of the Make-AWish Foundation song) and Grammy award producers. She is also a published author, having published a poem in the popular and inspiring “Children’s Friend” Magazine, in the June 2007 issue. She also published an article entitled “Wishing Upon The Stars” in a local magazine. She has written thousands of poems, along with nine fictional novels, an E-book on “Tuning your Relationships for Success,” and is currently working on her own life story entitled, “Just Believe in Magic.” Jeannie has also written her own Children’s program entitled “Once Upon A Sing-A-Long” which was designed to help instruct children on the healing benefits of reading, writing, and music. Jeannie enjoys working with children to help them improve their self esteem and creativity. She has also created several workshops for women and children, teaching them how to love and believe in themselves. Jeannie has performed and spoken on all-star stages, including Dan Fowler’s Imagination IQ event, where she appeared as her children’s character “Jedidah Starr,” and performed her new song “Just Believe.” She has been featured on television and film, including Allison Hildebrandt Larsen’s T.V. show “inside Out”, as well as Paul LaMarr aka “Cactus Jack’s” documentary “A Seat for Everyone.” where she was featured as the piano player. Jeannie was also interviewed by Christopher Kai, a Global Speaker, Entrepreneur and Bestselling Author, who compared her to Helen Keller as a “Miracle Worker.”  She was interviewed by Scott Wilhite, a film maker, about her Near Death Experience, and was featured on Scott’s program, “Are We Novice Gods” series, on “How to become Happy Again.” She has also recently been a guest on several podcasts and interviewed by Jill Lublin, on he "Kindness Matters" Movement , Bobbi Allison, (Famous Psychic Medium who was on Oprah and Dr. Oz) ), and Angel Marie Monichello's "Shine on" Movement. Jeannie learned to practice Radical Mindfulness through working with Daniel Guiterrez, who is an Author, Business Consultant , Speaker, Mindful Leadership Expert |Master Life/Business Coach, President of the Long Beach Holistic Chamber of Commerce, and former White House Advisor. Jeannie is a Certified Foot Zone therapist, Level II Reiki Practitioner, and a trained Guided Imagery Facilitator. She received a Bachelor’s Degree from Weber State University with a dual major in Social Work and Family Studies. She has worked with Cristine Price, CMHC for the past three years as support personnel and received the same Guided Imagery training as Cristine with Tree of Life Hypnotherapy (Felice Austin, CHt). Jeannie has the unique ability of integrating her music, poetry and Imagery to use for healing purposes. Her advanced creativity and intuition have allowed her to tap into the miraculous in regards to the transformation of her own life, as well as supporting the healing journeys of others.