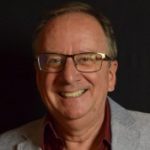 David Eugene Andrews loves languages and has studied German, Chinese, Italian, French, and Dutch. His travels have taken him to the Far East where he learned Mandarin and surveyed Chinese Art; to the Middle East where he first saw the Great Pyramids of Egypt while riding horseback across the desert with a friend; and to Europe where at the height of the Cold War an AP photographer captured him bearing an American flag while shaking hands with a Russian holding a Soviet flag. This iconic picture from the 1984 Winter Olympics in Sarajevo, Bosnia, hit the front page of USA Today and other newspapers around the globe.

Following the fall of Saigon, David Eugene Andrews worked at a Vietnamese refugee camp and set up English as a Second Language classes across the state of Washington. While living in Oregon, he co-chaired an International Affairs Symposium on the Middle East and the Oil Crisis. After earning two degrees in International Affairs, including one from Columbia University in New York City, he edited and published numerous international economic forecasts for Fortune 500 companies. Recognized as an international trade expert, he appeared on CNBC's predecessor, the Financial News Network. Continuing his studies in both accounting and law, he received a J.D. degree.

More recently, he has conducted personal interviews and written entertainment articles for a variety of publications. For the past decade, David Eugene has worked on the Empires and Kingdoms historical fiction series, centering on events in the 1595 to 1605 time period, both in Western Europe and also the Ottoman Empire in southeast Europe and the Middle East.