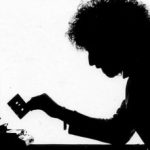 Jeff Cane, aka 'The Curlyman' started broadcasting down a phone line, by mistake! Creating UNIQUE 20 second outgoing messages for his answering machine in 1979 (11 years before the web). His idea went on to make him a UK 'subversive' phone broadcaster of notoriety!! Much radio, TV and press coverage resulted 6 years later in his raising of 750,000 pounds sterling to form a fully licensed company to link with British Telecom and broadcast to the nation DOWN PHONELINES. With Marconi as the suppliers of tek to this new (telephone) world order, his blinkered belief, came wonderfully TRUE!! With Marconi, he had access to some of the brightest Tek brains in the country, who were only too thrilled to test their computing with his wild telephonic imagination.

Some of that imagination resulted in being the first to EVER (1986) put a telephone music (Streaming) jukebox in a national newspaper, half page in The Sun. Amongst all his 'phony' proof is a 'Podcast' serial going down phone lines to the public featuring known British actors and the music score created by a very impressive composer - IN 1986!! He was the first person to ever give the public 30 second tasters of all singles released in a week (Music Week feature) AND creating the biggest phone prank THE WORLD has ever known. Let me not forget, the FIRST to ever have 'Followers' (around 1,000 a week in the early days).

In 1991 he emigrated to Los Angeles to pioneer all over again. As he puts it - "when one reaches the goal of the journey, it isn't long before one realizes it's the journey that counts..."

It's apparent, seeing that Social Media is a MAJOR part of our everyday life that HIS  AMAZING STORY (Margaret Thatcher is part of it as are several celebrities!) should be told - all the ingredients are there as you can see and this is THE TIP of the 'Iceberg' as regards the proof he is sitting on!

Whilst what he was doing did not carry the titles that we have today they were exactly the same, with one exception - THEY ALL WENT UNDER THE HEADING of 'THE CURLYMAN PRESENTS!!'