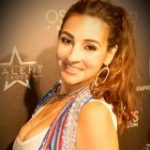 Performed as a backup vocalist for Michael w Smith and chris Tomlin at the age of 19 .

Grew up in church non denomination Christian background. Dececdant of a multi cultural parents mother is a native American from tribe Apache and father is from Wales England and Switzerland with parts of Germany decent .

Learned radio broadcasts at the same school as Howard stern and have been on terrestrial radio ktla in Los Angeles California.

written by ghostwriting many songs and some movie scripts for A list films and platinum selling albums .genre is pop and soul .

served the military as a armoror and supply sergeant for 10 years .

a mother of many children and have 2 grand children .

Will continue to love god and serve .