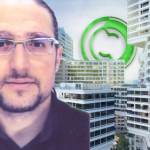 Founder of Glogreen and Rhizoma project

Angelo was born in Brussels, Belgium in 1973 from Italian parents who were traveling Europe to
buy and build real estate, so he was brought up in the world of construction.
Angelo holds a Master’s Degree in Philosophy from the University of Brussels and a MD in
Psychiatry from La Sorbonne University in Paris and Marseilles, France .
Starting at the age of 17, he traveled and lived around the world—from South America (Brazil,
Argentina) to Africa (DR Congo, Kenya, Madagascar, Yemen), India, Thailand and almost all of
Europe. Through those travels he learned six languages: French, Italian, Spanish, Portuguese,
English and Romanian.
Since leaving the medical world in 2005, Angelo has worked on rethinking real-estate construction in every aspect and creating a viable economy around it.